Mother Teresa the modern holy saint was born on Aug. 27, 1910,Her original name was Agnes Gonxha Bejaxhiu, and was originally an Albanian. At the tender age of 18, she entered the order of the Sisters of Our Lady of Loreto in Kolkata. Sisters of Our Lady of Loreto was an Irish community of nuns with a mission in India. For her livinghood she joined as a school teacher till 1946 but soon leaving the job she started her work for people of slums of Kolkata know as Calcutta at that time. 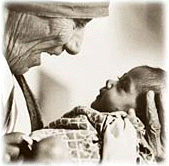 In 1946 she became the citizen of India and in 1950 Mother Teresa formed the Missionaries of Charitym where she worked for leprosy patients which was supposed to be untouchable at that time. The mMissionary also provided food for the needy,open schools for slum children, orphanages, youth centers, and shelters for dying poor.

Nirmal Hriday literally means pure heart. In 1952 Kali temple hostel domatery which was donated by city of Kolkata was made Home for Dying Destitutes and was named "Nirmal Hriday".

The Missionary worked for dying poors in peaceful way. The Nirmal hriday was expanded and the first house outside Kolkata was at Drachi. Soon it expanded in Delhi and other places. Centalized at Calcutta (Kolkata),Mother Teresa expanded her work globally and with more than 500 missions in 120 countries.

Mother was a real saint and her devotion towards poor and needy society all over the world. She got several prizes including Pope John XXIII Peace Prize in 1971 and India's Jawaharlal Nehru Award for International Understanding in 1972 and finally noble prize for peace in 1979.

At the age of 87 on September 5th 1997, Mother left us and died peacefully but her work will always remembered. She not only offered all sort of help for living poors but also made Home for Dying Destitutes for a peaceful death.

It is a great written work in short here and included all major events and works done by Saint Mother Teresa.

I think, in this article there should be some changes and inclusions which are follows:

1. The date of birth should be 26th August instead of 27th August. As 27th is the true birthday, but 26th should also be included to clarify the original birthday. (http://en.wikipedia.org/wiki/Mother_Teresa).

3. Her name is Agnesë Gonxhe Bojaxhiu or Agnes Gonxha Bejaxhiu, which one is right?

4. As the title is only for the "nirmal Hriday" for the dying with dignity but she also estabilshed and run successfull other centre such as "Shanti Nagar (City of Peace)for the leporacy and "Nirmala Shishu Bhavan" for the orphans and homeless youth in 1955.

5. She started opening houses for hospices, orphanages, and leper outside in India and such first house was in Venezuela in 1965 in a short time and approximately after 15 year of establishing her "Missionaries of Charity".

There are many things about the Nirmal Hriday and I will try to incorpoarte later.