Our train journey started from Howrah Station by Puri Express at 7P.M.of 1st January 2007. After this day at 9.30 A.M. morning, we reached Puri and took accommodation in sea side Hotel, this hotel are situated in beautiful place from where you can see the beautiful sea seen. In the evening we made a stroll in the Swargaaddwar (Meaning gate to heaven) Road, which runs straight in front of our Hotel Puri. We enjoyed cool, refreshing and pleasant breeze that was blowing very beautiful in the evening on the bank of Puri Beach. We also enjoyed from the road site the spectacular and imaginery views of sea and its waves in series striking continuously the Bank of Puri Beach, to see this my eye are totally gone to dreams. The place is regarded as a holy place where the people sacrificed help themselves at least for a moment on the feet of God after taking holy and refreshing bath in the beach. Next day morning at 11a.m. we enjoyed the scene of tourist playing with the thrust of wave on the one hand and scene of meditation on the other the hand. And also child are play in the see beach. The beach is generally grey and golden and joyfully soothing in every afternoon. I have been there in one winter and I have noticed the beach responding to the gorgeous waves silently and caring the beautiful babes and kids on her bossom.

A Beautiful and Dangerous Beach is Puri:

It was 1st January in 2007; me and my family members went to Puri to take the holy deep in the sea of Puri and to see the beautiful sea, because Puri is my favorite sea beach. According to Hindu mythology, the land of Puri belongs to Lord Jagannath. We heard of Puri beach and seen in picture but we have never seen real it before. What we had observed, it was never a calm and quiet sea. It was roaring all the time and many tourists are come here for holyday trip. High waves with full of salty water were coming fast from too distance continuously making loud noises as if every thing in the sea shore was going to be crushed. It was a wonderful and natural vision of sight. No one could imagine such a violent and beautiful beach. I have seen sea beach in different places such as Digha, but such a violent sea beach, I had never seen before. I really love sea. However, we enjoyed the rising Sun on the Bank of Puri Beach in the early morning at 5 a.m. 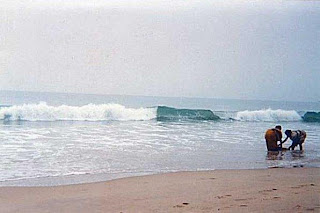 Height and velocity of Sea waves depend upon the weather condition like Bengal:

It was a program for swimming and playing in the water of the beach water with my family. But when we actually went to the beach area, we were warned by the Nolias, the Sea guards not to venture deep into the sea fo this cause my mind are totally off for this sea condition. The weather condition was not good; the abnormal behavior of Sea surface was noticed clearly. However after three hours we were allowed to go to sea for a little time only, any we can enjoying itself. Any time high wave with strong tidal current might pull the swimmer inside the sea and after an hour or two the dead body of the swimmer would be returned to the Bank of puri. 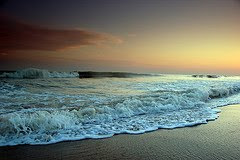 The Sea guards said this kind of incidents was a normal phenomenon in the Puri Beach and also say when whether are held not good then the tourist are not allowed for bath in sea. But still attraction of the Puri Beach was so much that once some one comes to the shore, no one can prevent himself from going to Sea to enjoy the thrust of sea wave. We did the same. We returned home with wonderful enjoyment and unforgettable memory, with some picture of our with puri beach.

Digha - the exotic beach of Bengal